Cars have steering wheels, but bikes have handlebars.  Why is that?  And why wheels? There's so much variety in cars, so why do car manufacturers not spice things up with square or triangle-shaped steering "wheel?"

We'll explain each of these in more detail as well and also steer you towards some other options that have been tried to turn a car in the direction we want it to take us.

The symmetry of movement alone is one of the biggest reasons that steering wheels are round. Not to mention the comfort and how easy it is to steer with a round steering wheel.

But to make things even more simple, the steering wheel is perfectly balanced for operation, meaning that it takes the same amount of force to move the wheel from any point on the wheel, in comparison to any other shape.

With a circle, you can place your hands wherever you want to and still have some room to move around.

The circle shape makes parking easy and possible. Any other configuration would cause parking and drive in reverse tricky. Imagine trying to parallel park with a square "wheel." Many of us would never have passed a driving test.

In this video you can see how the driver can easily turn the wheel and make corrections with relative ease.

The Physics Behind the Steering Wheel

Engineers use the circle to get the most torque from a single point of rotation. Torque from the steering wheel comes where the angle is between the point of force and the axis to the line of energy.

The only way to maximize the torque at all optimal points is to use a circle.  With a circle, a vehicle can have consistent torque at all angles of movement.   Amardip Ghodichor,  Senior Engineer at Hella India Automotive, explains this theory here.

There are two different types of steering systems that allow a vehicle to turn appropriately, including those nice U-Turns that everybody checks when purchasing a new car: The rack and pinion system, and the gearbox system.  Both systems use levers and angles to turn the wheels in the proper place for the intended destination.

The Rack and Pinion System

The rack and pinion system work by having a steering column connected to a universal joint.  The universal joint makes it so that the steering wheel can remain in one place without having to move it side to side to steer.

There is a pinon at the bottom of the steering column connections that are connected to a rack.  When the wheel is turned, the pinion turns the rack, which pushes or pulls the wheels in the direction they need to go to make the turn.

The steering box system works by placing the steering column inside a gearbox, which holds a rod with a spiral cut into it, and a pin that turns with the steering wheel. As you turn the wheel, the mechanism rotates the peg, which turns the wheel.

At the beginning of this video you can see the basic operation of how the power steering box works.

If a driver needs to move over a lane suddenly, they can accomplish this task with minimal effort, and the movement is the same every time.

In the event of a crash, there are no sharp angles that can cause a puncture to the abdominal area of the operator. With a square, triangle, or octagon, the possibility for abdominal lacerations or punctures is present during a crash.

Not to mention that it would become rather difficult to steer and maintain a constant forward motion with any other shape.

The circle allows for movement to occur concerning the shape of the human body in a sitting position. No matter what size or shape of the operator that gets behind the wheel, the motion, movement, and sensitivity is always the same.

If someone's weight hasn't caught up to their height yet, the wheel is still comfortable enough to adjust for driving.

Hand placement is crucial when trying to find the perfect spot to drive. Whether its 10 and 2 o'clock (or the currently recommended 9 and 3) or even 8 and 4, the only way all these combinations are possible is with a round steering wheel.

Imagine trying to find the 9 and 3 on a triangular steering "wheel."

Other Types of Steering

Round steering wheels are not the only way to turn a car.  Here are some other ways that have been tried.

Early automobiles used a Tiller style steering lever like a shipping form of steering a rudder. The lever would need to be pushed in the opposite direction of intended travel. The lever is pushed to the right, the wheels would pivot, and the vehicle would make the turn to the left.

With a steering wheel, the operator turns the wheel in the direction that they wish to go.

Ladder trucks use tiller steering to control the trailer where the ladder is connected to the trailer. Sme recumbent bicycles also use the tiller steering system with a person seated almost lying down inside the Bicycle with the lever positioned between the legs rising to the chest of the rider.

Trikes and 4-wheelers use tiller steering to control the vehicle. Other vehicles still use the tiller as an effective method of steering the vessel. These are mostly slow-moving vehicles or remote-controlled vehicles.

Since we are used to handlebars on bikes and motorcycles, why not use them for cars?

Motorcycles and other lightweight vehicles use handlebars instead of steering wheels as there is not much involved in turning the bike, which can easily be controlled by the handlebars.

With a large four-wheeled vehicle, the handlebars would become too difficult to control the car at higher speeds; therefore, you need leverage, or a rack and pinion system, which requires a wheel.

Also, if a car had handlebars, then you could only turn the handles as far as the dash would allow you to. There's no way you could ever make a 90 degree turn with a dashboard in the way.

However, it doesn't mean that somebody hasn't tried to build a car with handlebars.  Check out this image.

Every now and then, a manufacturer tries something different.  Chrysler used a squarish "wheel" in its 1960-1964 Plymouth Fury.  The British car manufacturer tried something they called "quartic" for their Austin Allegro 1978-1982 models.  That didn't work out either.  To see pictures of those, and a few other odd variations, follow this link.

Even if one day cars could be steered by some other mechanism, we've been so used to calling them steering "wheels" we think they will always be called that. 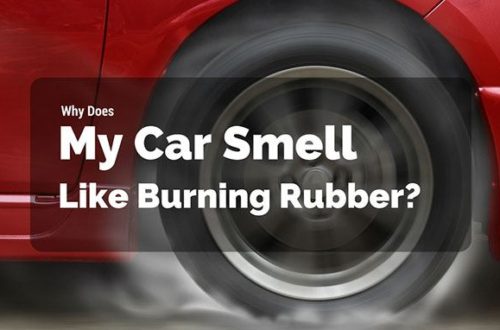 How To Install A Second Battery For Your Car’s Audio System?